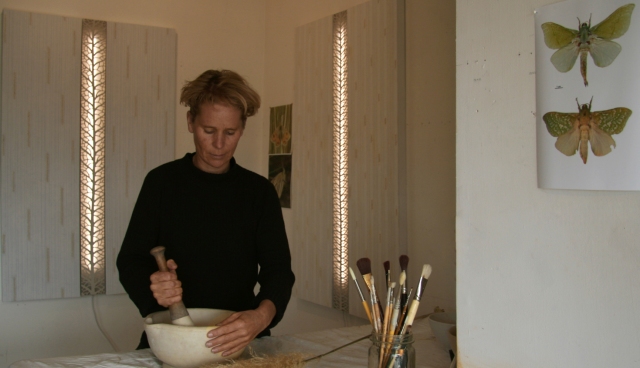 As an artist Nic Moon explores aspects of human ecology – the relationship between humans and our natural, social and built environments. She is equally at home working in remote places or industrial urban landscapes.

Her work is multi-disciplinary and often involves collaboration with scientists, architects and specialist fabricators.   She works in a multi-faceted way, incorporating installation, sculpture, light, photography, painting and drawing into her practice.

A pool of light…

a shadow is cast…

For ten years (1995 – 2005) Nic worked from a studio beside the Nelson Lakes National Park, in New Zealand’s Southern Alps.  During this time she exhibited mostly in Auckland.

While influenced by the light, the weather and the physical extremes of this environment, Nic became acutely aware of the transience and fragility of life here.  Attempts to grow food, create shelter and deal with the psychological challenges of solitude on a windy alpine pass inspired an ongoing interest in both Eastern and Western Philosophy and in Permaculture.

The Dandelion Has My Smile. A small shelter made from rubbish and edible weeds. 1500mm height. 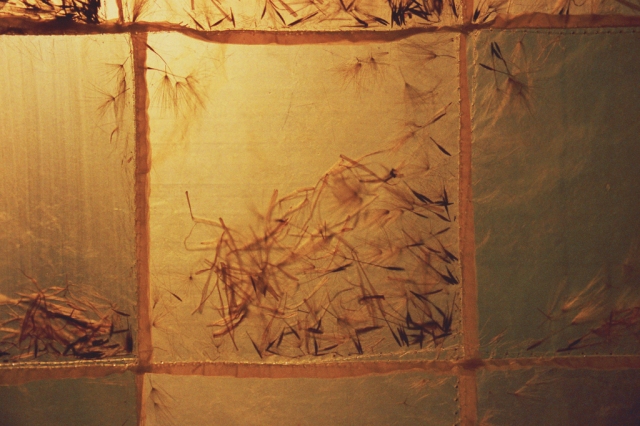 One thousand packets made from recycled plastic shopping bags. Each packet contains the seeds from one dandelion flower.

Tiny tarns/lakes in the mountains above the studio.

Touch. An enlarged human fingerprint pattern and the feathers of endangered Tarapuka (Black Billed Gulls) that nest in the river valleys nearby. 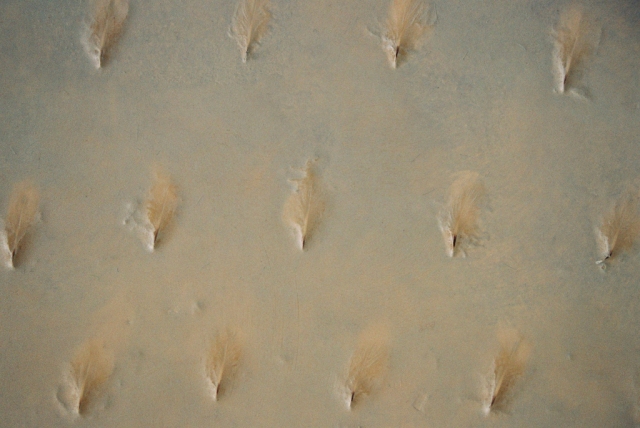 Oil, wax and feathers on board.

In 2005 Nic moved to Nelson, and over the past twelve years has established a studio and permaculture food forest above the industrial port.   She often works collaboratively with specialist engineers in their large port-based workshops.

The view from Nic’s current studio.

Materials and the processes of making have become central to her work.  Nic’s paintings, installations and intricate sculptural works often incorporate light, creating artworks that provide experiences that are quiet, theatrical and immersive. 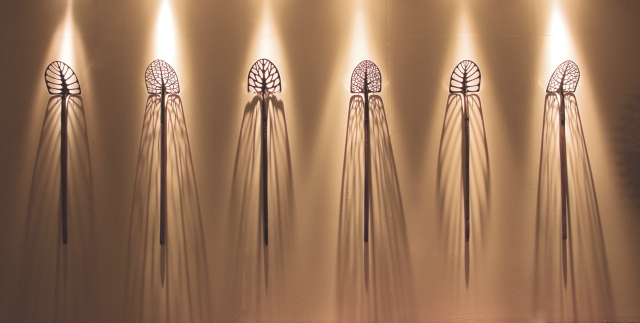 Cross-cut or pit saws, used to clear the ancient forest from the Suter Gallery site in Nelson, NZ at the time of European settlement.

Nic was awarded the William Hodges Fellowship in 2009.  She spent six months as artist in residence in Southland, New Zealand’s most southern region.  While there she was invited to join a team of scientists on a ten-day boat trip to the remote Dusky Sound.

The resulting project, exhibited at the Southland Museum and Art Gallery in 2010, was a collaboration with scientists, farmers and ecologists.  Nic was one of six artists to represent New Zealand (with this work) at the October Gallery during the City of London Festival in 2011.

The Inner Sanctum. 2010. The Bones of One New Zealand Dairy Cow are surrounded by six Wild Things. 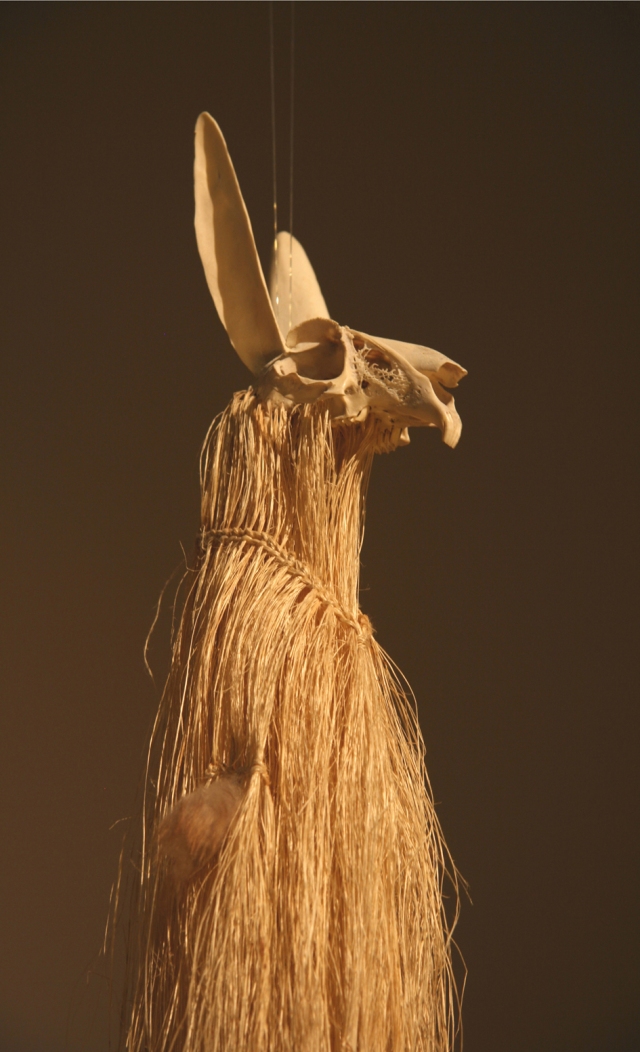 A series of skulls (from mammals introduced to New Zealand) combine with indigenous harakeke (flax) fibre to reference the waterfalls of Dusky Sound in Fiordland National Park.

An Auckland Council commission in 2013 was the beginning of a two-year project to create a sculptural installation for a new library at Ranui, in the Waitakere Ranges west of Auckland. Nic worked in collaboration with Jasmax architect Lars von Minden. 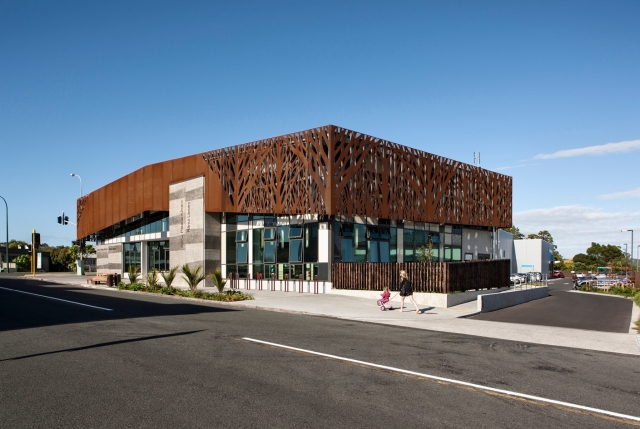 Ranui Library. A corten steel canopy, inspired by the original forest on the site, wraps around the building, casting dappled light into the interior.

Recent projects include a sculptural installation for Auckland International Airport, based on a series of work exhibited at Sculpture on the Gulf, Auckland 2013. 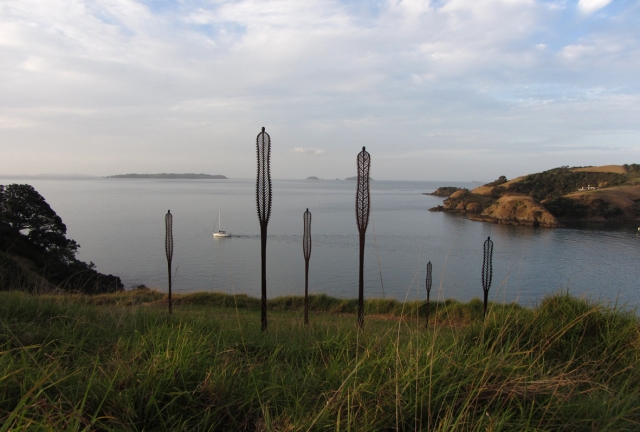 Breath. Heights variable 3m – 1.6m. A series of corten steel figures sway gently in the breeze, inspired by the sapling forest nearby.

Nic collaborated with architect Lyn Russell to design and create The Cocoon, for Christchurch’s Whole House Reuse project, exhibited at Canterbury Museum in 2015.

The Cocoon. A studio made from the reclaimed materials of one Christchurch earthquake- damaged house. Exhibited with 400 other useful objects, all made from the same house.

In 2016 Nic completed a sculptural project to commemorate the 50th Anniversary of Regional Parks in Auckland. 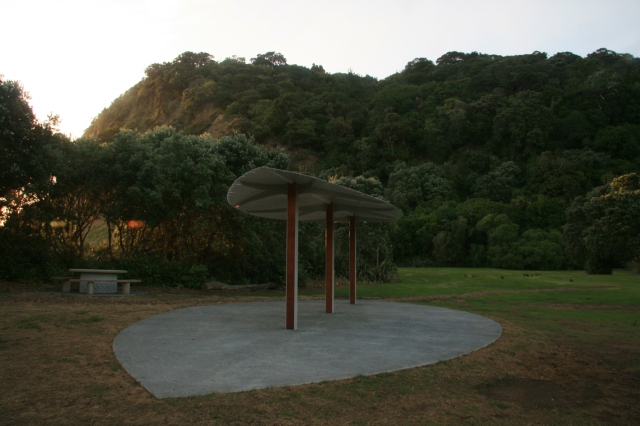 Along with these projects Nic has had many solo exhibitions, and has work in numerous public, private and corporate collections. 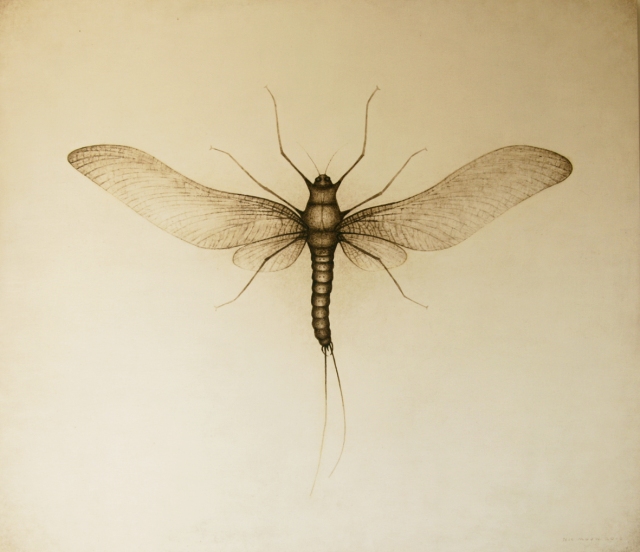 Watercolour – Mayfly. 900 x 1040mm. Cow dung watercolour on board. A series of paintings of the flying insects that live in New Zealand’s unpolluted rivers and streams. Scientists use them as indicators of water quality.