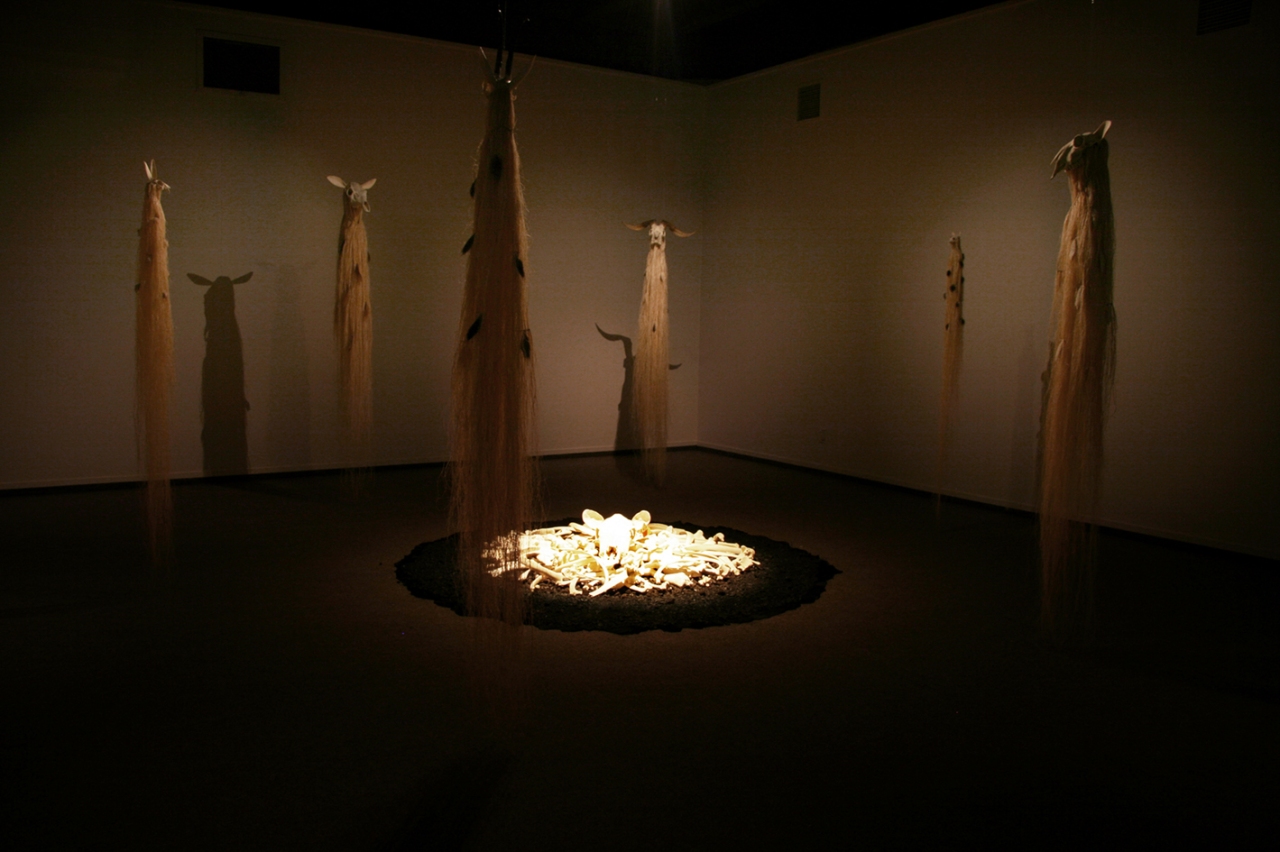 In 2009 I spent six months in Southland as the William Hodges Fellowship Artist in Residence.  I began research for my project with a six-day boat journey to Dusky Sound, generously sponsored by a couple who are engaged in science and ecology projects.

I wanted to experience first hand the raw environment that William Hodges painted as expedition artist aboard Cook’s ship, the Resolution, in 1773.

I learnt from the extensive onboard library that, following Cook’s exploration and mapping, Fiordland was inundated with temporary settlements of European sealers and whalers, who were followed in Southland by flax millers, saw millers and farmers.

Fiordland of today is a remote and un-peopled national park, a five-hour boat journey down South-Westland’s exposed and unforgiving coast. 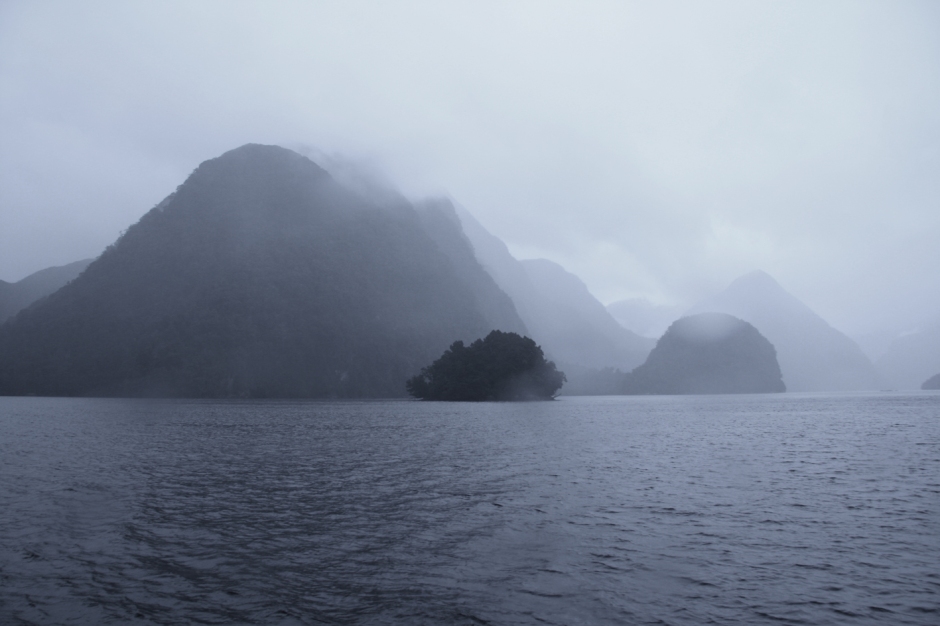 On my first morning in Dusky Sound I was struck by the eerie silence of the famous Fiordland ‘dawn chorus’. 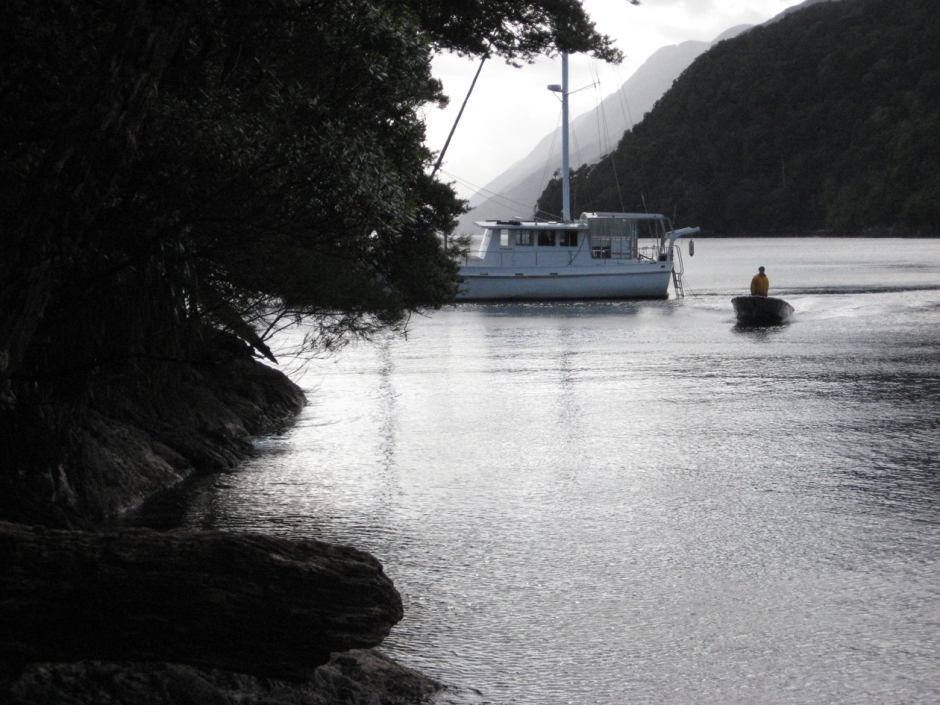 I began to realise the daunting task that conservationists have in preserving such a vast and remote area of World Heritage landscape. The ’jewel in the crown’ of our wilderness National Parks is full of introduced mammals.

This forest should be thick with young, regenerating trees. 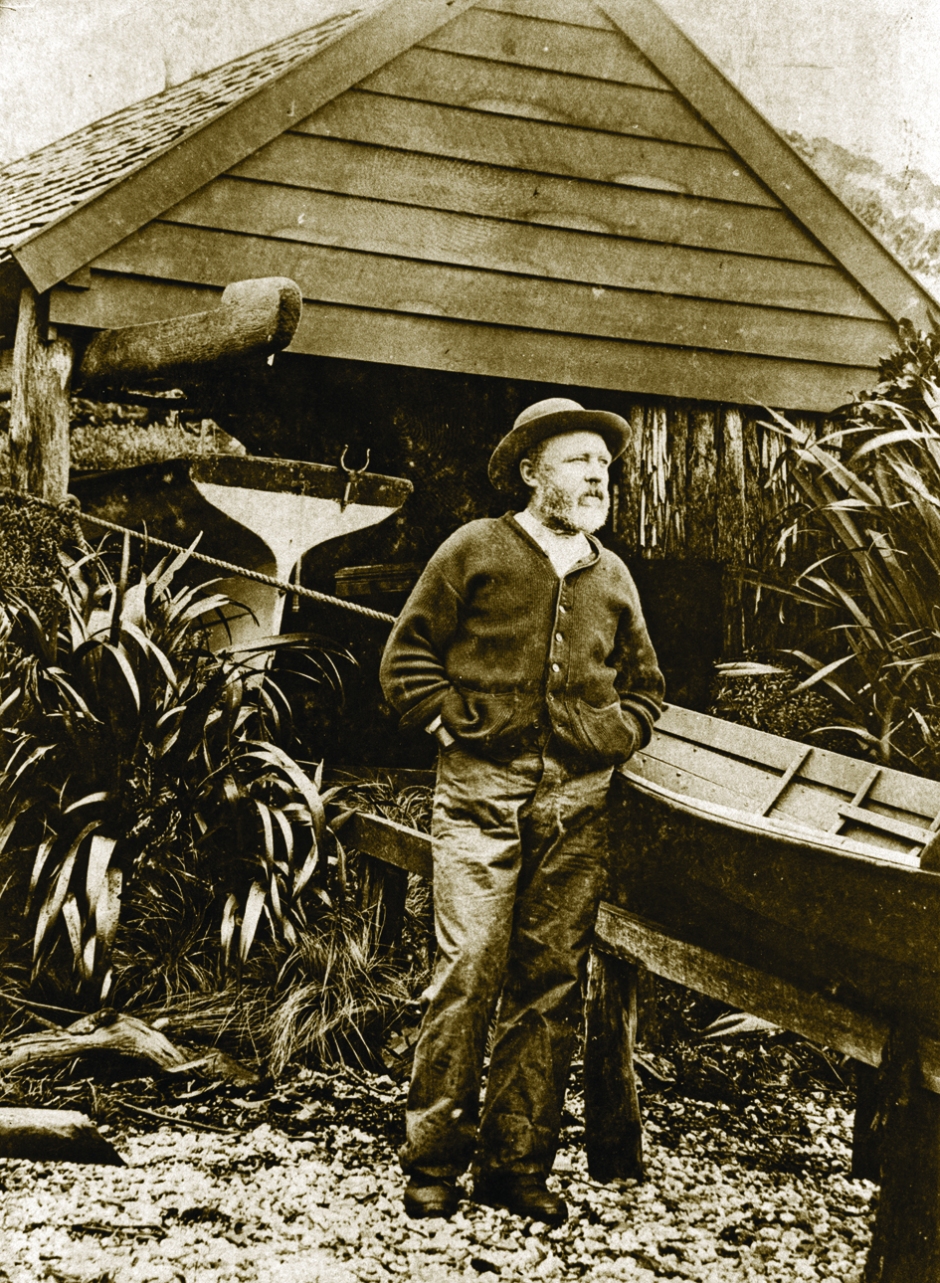 Richard Henry endured a fourteen-year quest to save Kiwi and Kakapo from the devastating impact of introduced stoats, ferrets and weasels.

He caught these large flightless birds on the mainland, with the help of a muzzled dog.  He then rowed them across a stormy stretch of water to the safety of Pigeon Island.  Here he kept them in a small enclosure made from locally gathered logs until the stormy weather allowed for their release on the offshore Resolution Island.

The remains of Richard Henry’s bird pen on Pigeon Island

His project tragically ended in reports of a stoat on Resolution Island, revealing that they could swim a fair distance.  The expanse of water between the island and the mainland was not enough to keep these predators at bay.  Pest eradication techniques for island sanctuaries had not yet been developed, so Richard Henry left Dusky Sound defeated.

Department of Conservation scientists have since used his journals in their contemporary quest to save critically endangered Kakapo.

At the end of my Dusky Sound trip I was offered a collection of 1000 rat, stoat and mouse skulls. These skulls had been cleaned, numbered, recorded and stored in individual glass jars (for future scientific study) by Bruce Thomas and a team of ecologists over a period of forty years. 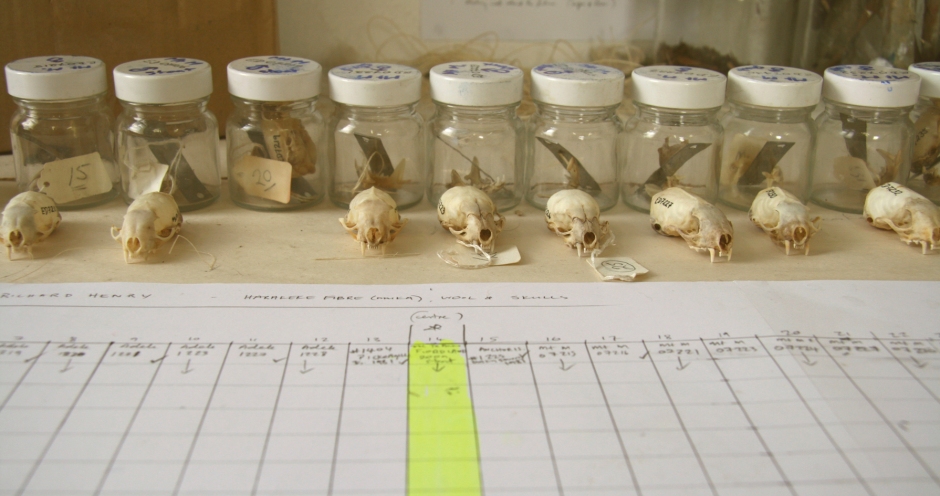 They are the physical record of early conservation projects in places like Dusky and Breaksea Sound.  These were some of the first experiments in the world to use extensive trapping to create predator-free island sanctuaries for endangered wildlife.

This historical collection of skulls, and my experience of Fiordland’s stormy, water-filled landscape formed the starting point for my project.

Back at the studio my collection of bones, skulls and skins from introduced mammals gradually expanded – thanks to the generosity of local farmers and hunters. I was given a whole cow skeleton by a dairy farmer, freshly killed deer heads by a local hunter, the newly slaughtered head of a dairy cow by a local butcher and the heads of eight hares and rabbits by a local farmer.

Sorry for this image vegetarians! Just be grateful that I didn’t include the the image of a freshly slaughtered cow head. Southland is a place of multiple abbatoirs.

It was time to toughen up (luckily I was raised on a farm), so I began the task of cleaning these raw materials ready for inclusion in a museum-based art exhibition. This is an interesting task when you are living and working in a public space right beside the 24-hour McDonalds drive-through, in the centre of Invercargill City. 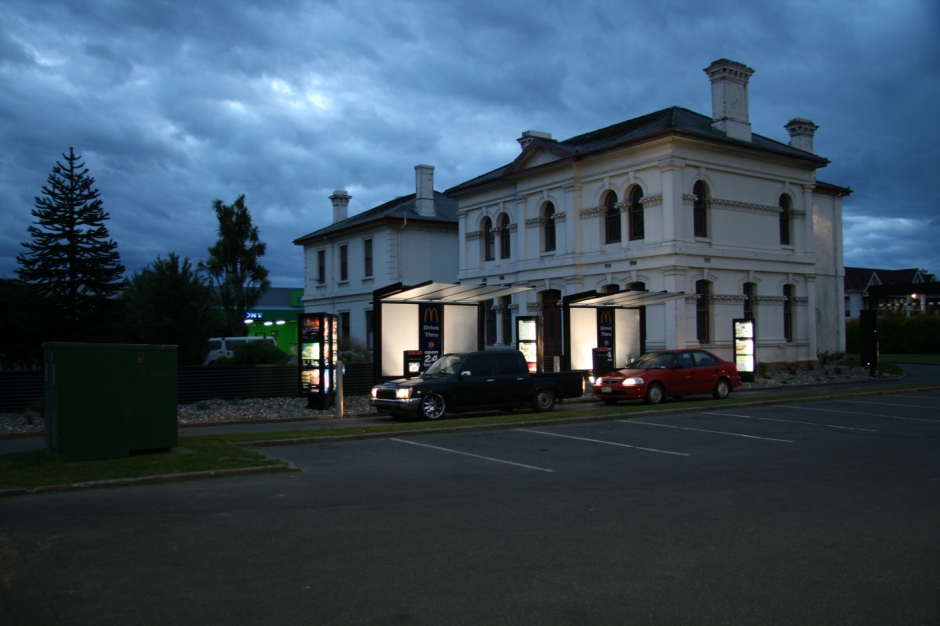 Burwell House – part of the old maternity hospital. The artist in residence is housed in the left-hand building, with studios on the ground floor and accommodation above.

Entering fully into the spirit of rural Southland, I bought a sharp knife and proceeded to set up a skinning operation (much to my dog’s admiration and my friend’s disgust).  Then the month-long boiling and cleaning operation began in the carpark beside Burwell House.  I found a forty-four gallon drum and a gas ring at nearby Todd’s Auction House (a place where chooks and pigs are sold among the antiques and refrigerators, right in the centre of town). 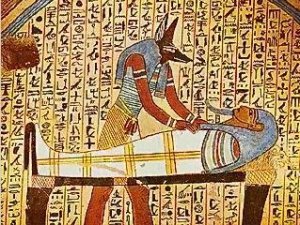 This challenge inspired me to research the global origins of our European based hunting, farming and burial practices.  I found images of Egyptian gods depicted as animal-headed human forms (such as Anubis, the jackal-headed god associated with mummification and burial rituals).

The museums of Southland were a fantastic treasure-trove of local artefacts and stories. They revealed the ways that people have survived in this harsh environment.  Inspiration came from a Maori necklace made from (now extinct) moa bone, fashioned into imitation whale-teeth.  There were also items of clothing (made of locally gathered natural materials) by early European ship-wreck survivors on a remote island off Southland’s storm-lashed coast.

An unexpected experience was the life-sized ‘Provider Figures’ – hunters from Mali. This is part of the John Money Collection at the Eastern Southland Gallery, which I found particularly evocative in the context of rural Southland.

Inspired by a pair of harakeke-fibre sandals made by a ship-wreck survivor, I visited the Templeton Flaxmill Heritage Museum.  With fibre from the museum’s restored mill I began a process of weaving and plaiting, using very basic ancient techniques and experimenting with ways to incorporate my collections of skulls into the work.

Long hours were spent weaving, plaiting and bone carving, tucked up in the studio at Burwell House while the stormy weather rolled in from Antarctica, rocking the old building on its foundations. 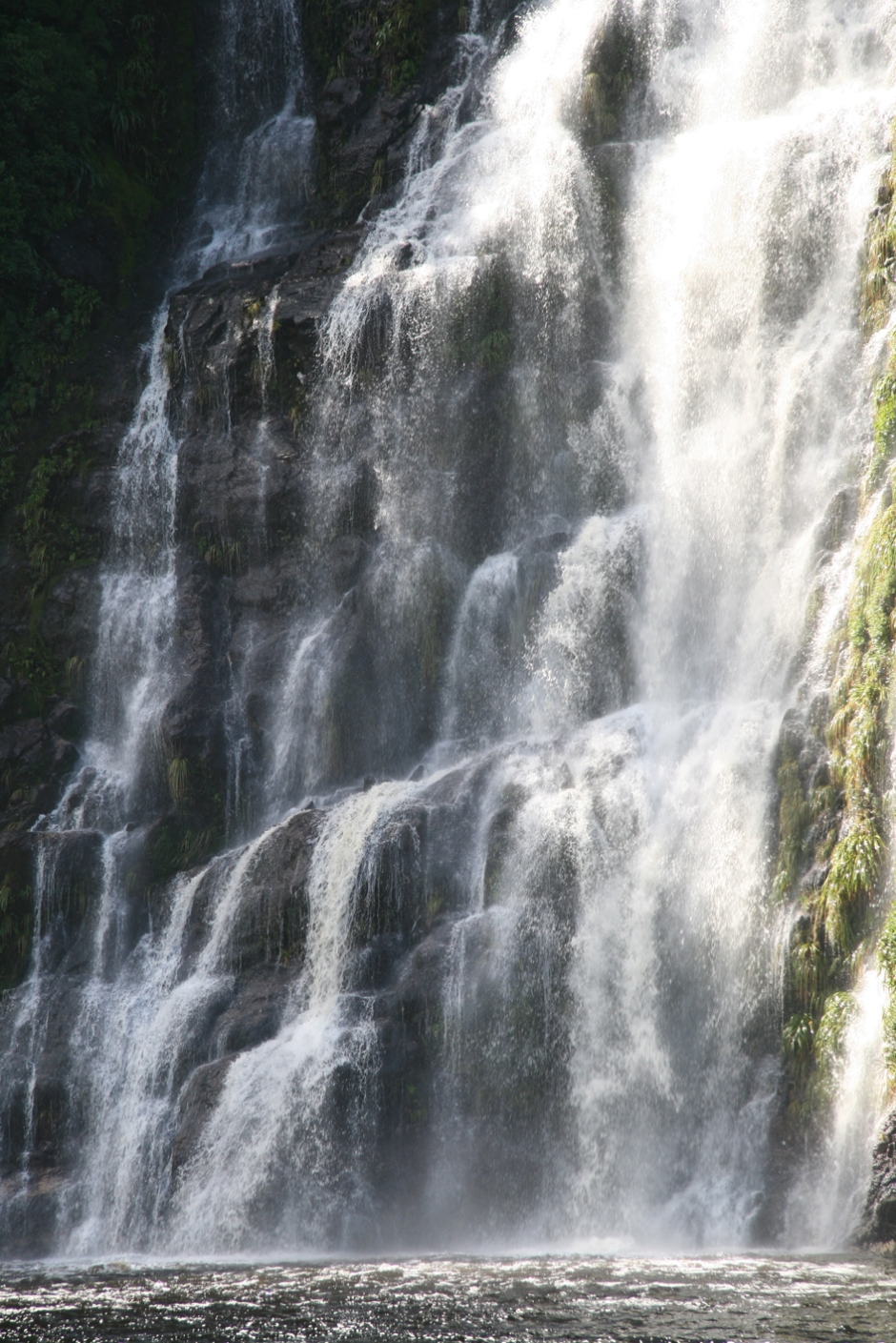 The resulting body of work Jewel in the Crown was exhibited at the Southland Museum and Art Gallery in February 2010.  This sculptural installation was inspired by aspects of Southland’s environmental history, and the waterfalls in Fiordland’s Dusky Sound.  It is made entirely from materials gathered and processed in the Southland environment. 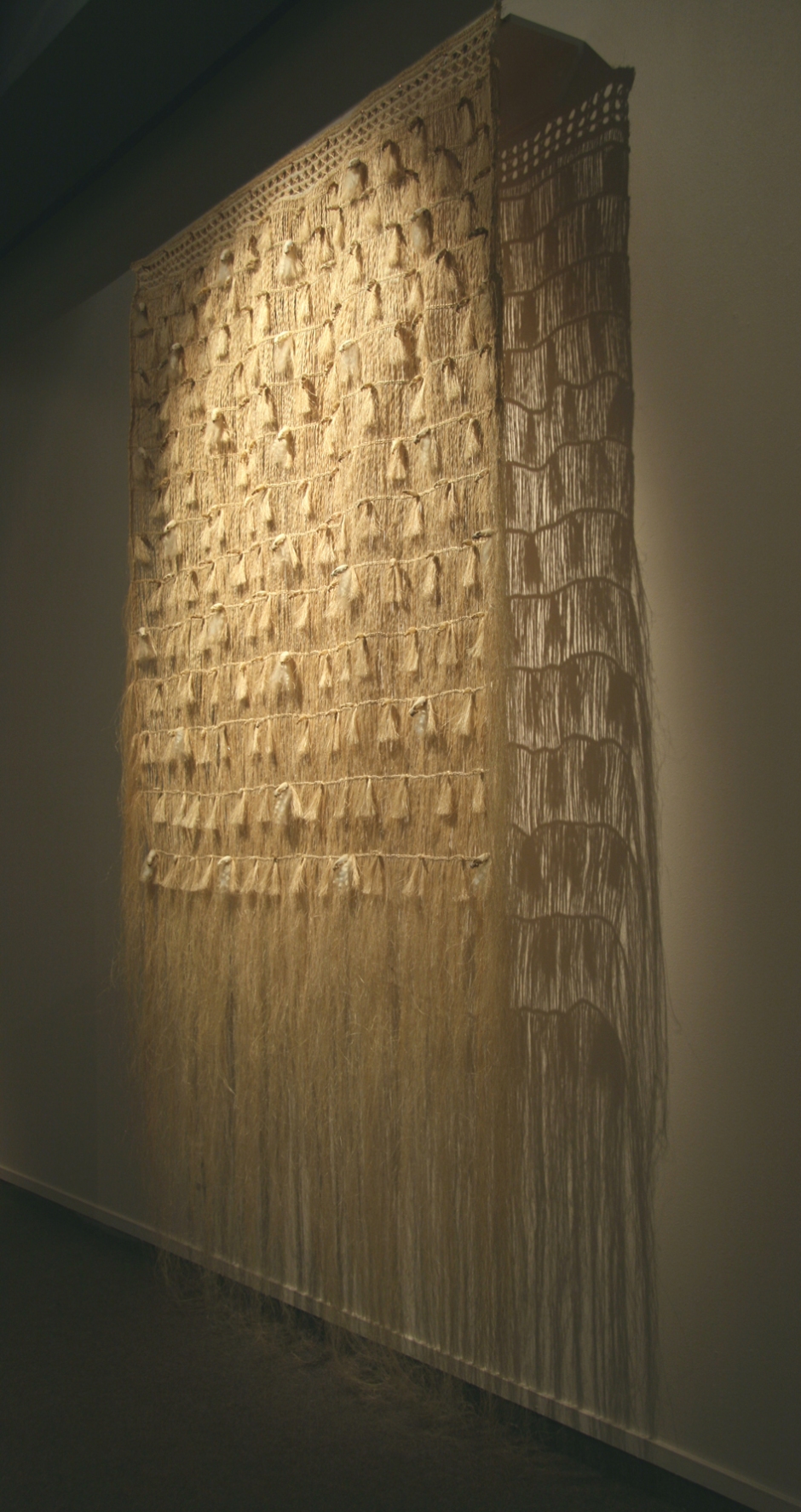 Inspired by Richard Henry’s isolation in the wet and cold environment of Dusky Sound, I decided to weave him a blanket.  Experienced local Maori families (in the 1800s) wore clothing made of plant fibres that were much better suited to the constantly wet conditions of Fiordland than Richard Henry’s wool and oil skin European imports.

Drawing on traditional Maori and European weaving techniques, Richard Henry’s blanket is adorned with hundreds of skulls from the introduced predators of New Zealand’s indigenous birds.

Traditional Maori cloaks were adorned with indigenous bird feathers.  I have chosen to combine skulls from their predators, with harakeke and sheep’s wool.  This artwork, along with the remaining scientific skull collection, is in the Southland Museum and Art Gallery collection.  A detailed map of the artwork records the relationship between each empty jar and the corresponding skull, for future scientific reference. 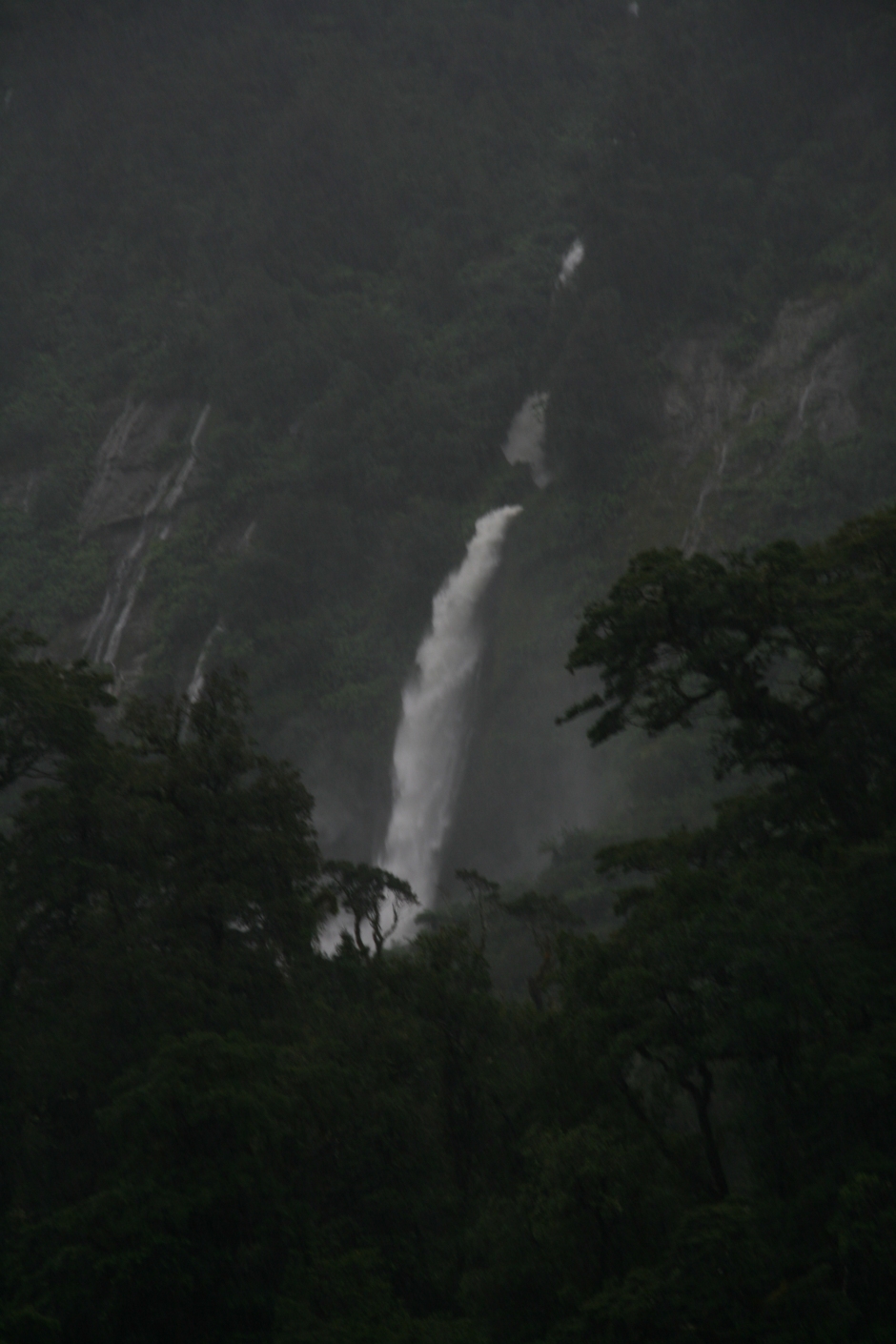 The cave-like Inner Sanctum installation, in an adjoining room, was inspired by the cascading waterfalls of Fiordland National Park.

The Inner Sanctum: The Bones of One New Zealand Dairy Cow, on a bed of coal, surrounded by six Wild Things. Installation 7000mm x 7000mm

It evokes an ancient gathering around a bone-fire.  This community consists of the spirit figures of the introduced mammals that are hunted and farmed in the Southland region.  The remote south is a place of dramatic contrasts and raw beauty, where it is easy to imagine the lives and struggles of early Maori and European settlers and explorers. 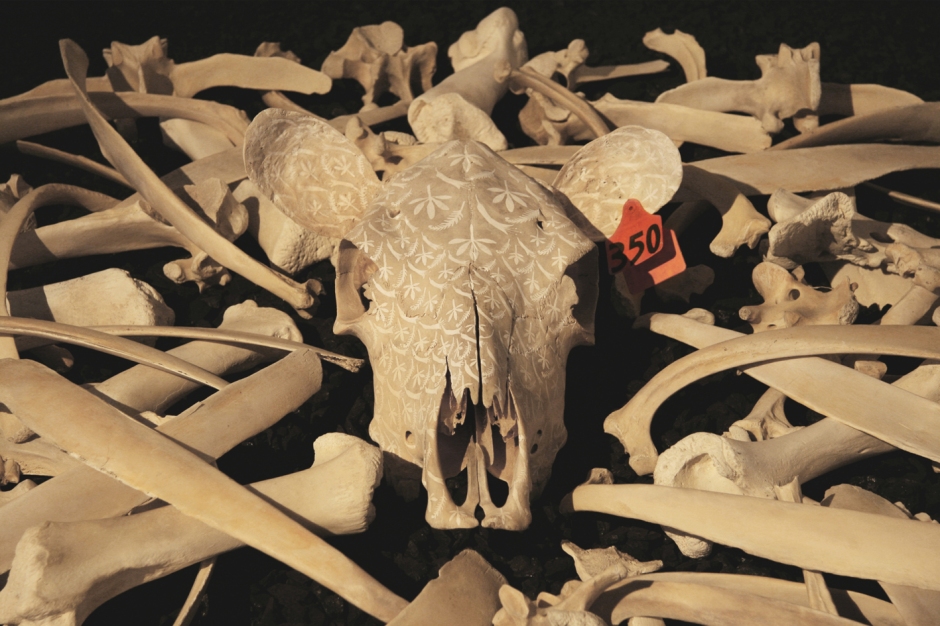 New Zealand derives much of its income from farming, yet is also reliant on overseas visitors who come to experience our natural environment in its pristine wilderness form.  The tension between these two things creates ongoing tensions and passionate national debate.

The Crown Jewels is a series of necklaces adorned with the skulls of introduced predator pests.  This collection is a celebration of the combined work of Iwi, Department of Conservation staff , scientists and locals who work to restore our forest ecosystems to their pre-mammal-predator glory.

As an artist I enjoy bringing opposites into juxtaposition.  I was welcomed warmly into the Southland community and enjoyed the support and knowledge of local farmers, hunters, conservationists and museum staff during my residency.  The highlight of my stay in Southland was seeing 150 locals engaged in lively conversation at the exhibition opening.