This project commemorates the 50th anniversary of Auckland’s Regional Parks. The brief was to create a ‘functional’ artwork. What resulted was a nine-meter-long shelter, inspired by the feather of a Kererū (Kūkupa or Wood Pigeon). The site was opened at Wenderholm Regional Park  north of Auckland in the summer of 2016.

Wenderholm was the first coastal forest/farm property that Auckland Council purchased and transformed.   It has a rich environmental and human history, a long-running Kererū conservation project, and is headquarters for the Northern Regional Parks team.

In 2008 I had the opportunity to live and work onsite at Wenderholm for a month as Auckland Council’s Artist in Residence.  I drew on this intensive period of research and observation as I contemplated initial ideas for my proposal.  Kererū play a vital role in distributing the large seeds of our remnant coastal forests.

On the day of my return to Wenderholm for the first project briefing Kererū were performing dramatic dives from high on the hill.  The water in the tidal estuary (the Puhoi River) was glassy calm and I was reminded that this place had provided shelter and sustenance for humans for hundreds of years.  The seed of an idea was sown – to create a simple shelter for park users, inspired by the feather of a Kēreru.

I began the project early in 2016 by travelling around the district to meet representatives from Ngāti Manuhiri, Ngāti Whātua o Kaipara, Ngāti Rango and Te Kawerau a Maki, all of whom have strong ancestral connections to the area.  This became an ongoing consultation and collaboration throughout the project, for which I am grateful.

A long period of design and consultation followed, in collaboration with the team at Wenderholm Regional Park, a structural engineer and the fabrication engineers . Finally the technical drawings were complete for the consent process and work could begin. 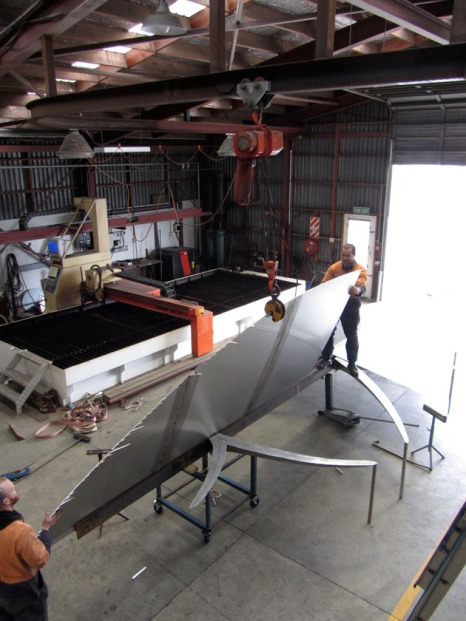 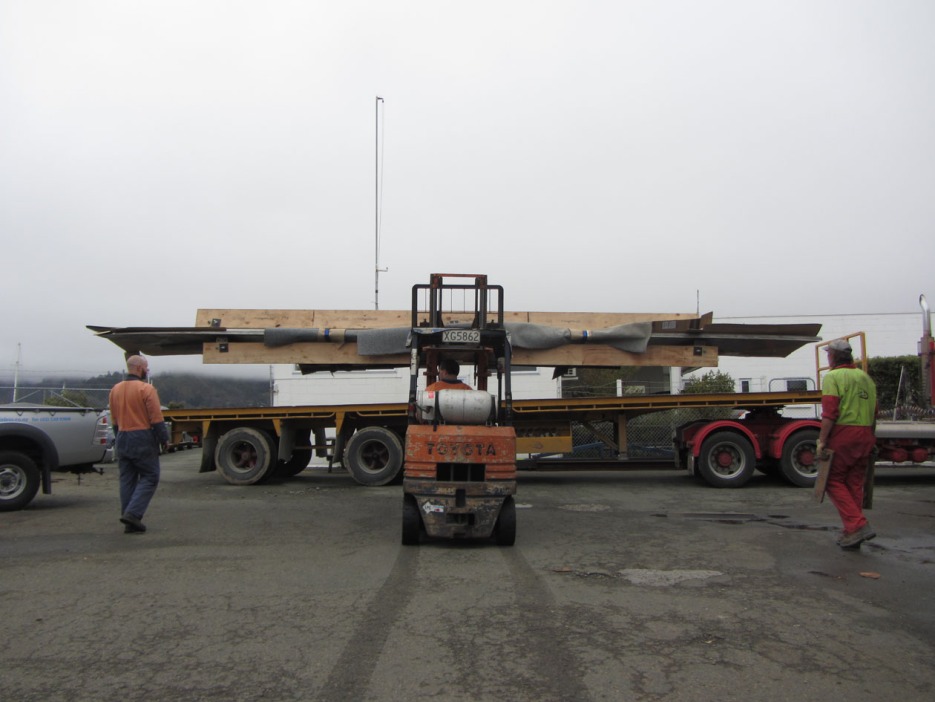 It was then trucked across town and bead blasted in a local painting factory.  A huge feather-inspired stencil was applied and the work was painted to a marine-grade finish. 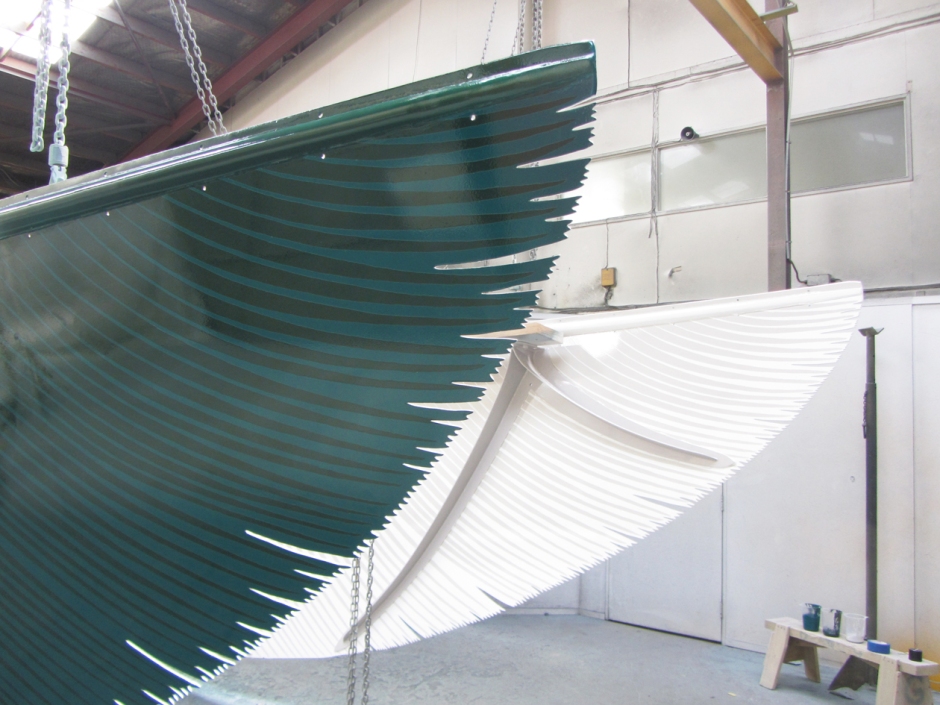 We then built a huge crate using laminated timber beams (which will be re-used by the Regional Parks team for a building project).   The sculpture was carefully lowered into the crate, and strapped to an open shipping container for transport by ship to Auckland and truck to Wenderholm Regional Park. 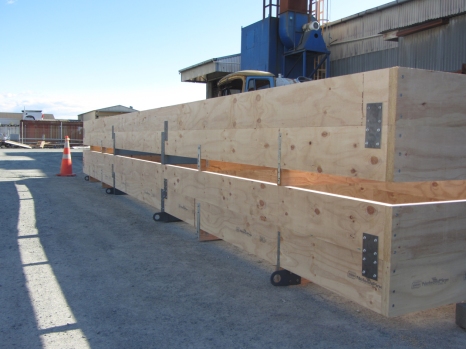 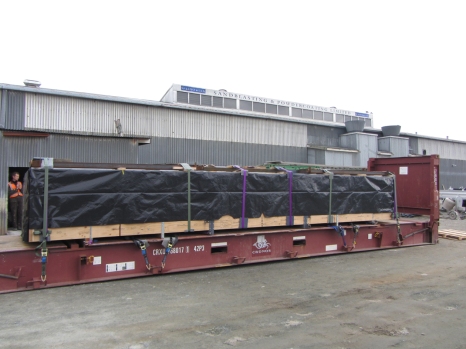 Spring weather conditions at Wenderholm were challenging, and we had to delay installation while the new duck pond (flood) subsided.  But we finally bolted the two sides together along the spine, and the shelter was lifted into place.

The combination of machinery, human-power,  Kererū flying overhead to inspect, and a mother-duck and five ducklings as site-supervisors was just the perfect mix.  The final touches involved a week working with the Auckland Council team and a local plumber to install a permanently running water-source in the form of a huge overhead bird bath. We then planted indigenous food/berry trees to bring Kererū to the site. 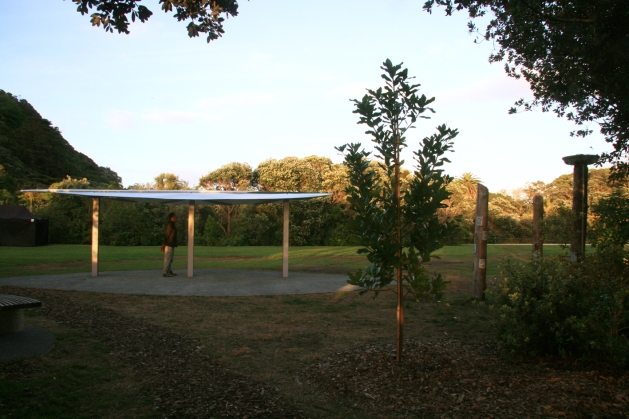 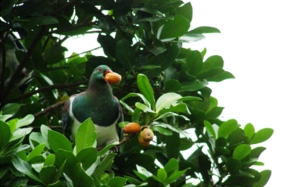 My hope is that over time the site will become a place of shelter, a gathering place for both Kererū and people. 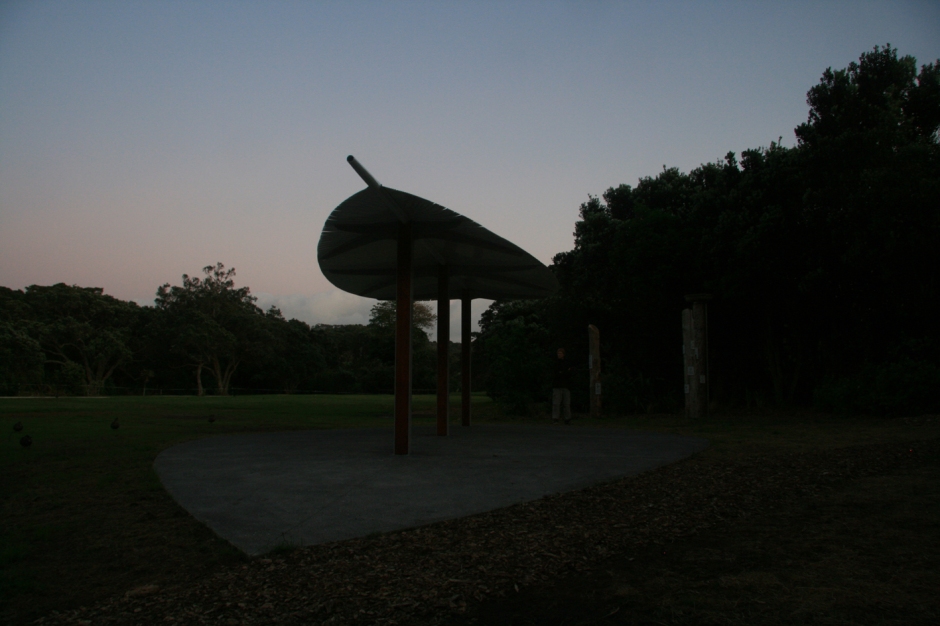 The final reward for a year of intense work was a beautiful dawn blessing.  As karakia were recited, waita were sung and speeches were made we were blessed with Kererū display-diving in the skies above us and mother duck/supervisor waddling through with her inquisitive ducklings.

This was followed by tea and breakfast on the lawn of Couldrey House (the onsite Victorian-style museum), with a lively debate being conducted from the porch about local Iwi politics and Council-Iwi relations.

The feather of a Kererū/Kūkupa hovers overhead – a shelter both in a physical and a metaphorical sense. Inspiration is drawn from the longstanding relationship between humans and these manu (birds) in the coastal forests of Auckland.

This shelter acknowledges mana whenua iwi and all who have worked to care for Kererū/Kūkupa and the treasured remnants of our ngāhere (bush/forest).